In the Footsteps of Our Ancestors 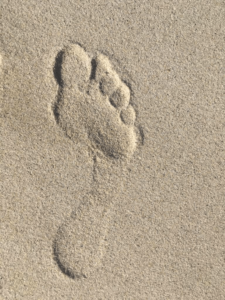 Note: I have amended this article to reflect the correct term when referring to the original inhabitants of Australia, as being ‘aboriginal people’ rather than Aboriginals.
Creation myths tell of a legendary creator being who wandered over the land, singing out the name of everything that crossed their path – animals, plants, rocks, birds, springs, trees – and thus singing the world into existence.One of the most powerful and enduring of these traditions is that of the aboriginal people of the continent of Australia.  It is my belief that such animist belief systems and cultures were once what I term the “Pattern of Existence”, which encircled this earth and thereby ‘kept it in tune’ by singing it into health.
For aboriginal people, a ‘Dreaming Track’ or ‘Songline’ is one of the paths across the land – or sometimes the sky – which mark out the route that the original ‘Dreamer’ or ‘Creator Being’ followed when they sang the land into existence.
Just as there are aboriginal people in the Southern Hemisphere, my equivalent term for people who carved out such songlines or dreaming tracks in these northern lands where I happen to have been born and live, is arboriginal people.
(Arbor as in “of the trees “)
What we learn from the dreaming cultures which managed to somehow survive, is that the songs that are sung to the land, are in order to keep it in good health. The aim of aboriginal people -and arboriginal people too I believe- was to ensure that the land was handed on to the next generation in the same good health it had been handed on to them by previous generations: It didn’t need “improving” because it was perfect “as is ” .
It needed tending (note the word ‘tender’), nurturing, stewardship and care. This they managed to do for tens of thousands of years – until modern man destroyed that way of relating to the land.
By singing to the land, it was ‘healed’, ‘kept whole’ , ‘harmonised’ , ‘re-tuned’ or ‘brought back into tune’ .
In healing the land, good health was ensured for the human as much as much as it was for every blade of grass, tiny snail or mountain or stream.
I believe it is encumbent on us as druids to rediscover and re consecrate these ancient tracks, which are the “Footprints of Our Ancestors” as they are also known.
Wherever we happen to live on this earth, I believe there were once these lines of song, tracking the path of the Dreamers who brought life into being.
We can re-vitalise our lands by singing them back into tune; by chanting them back into being.
In a time of despair and destruction, this is an act, either as individuals or in groups, which offers hope, offers life, offers beauty.
Follow a Rainbow Trail
Follow a trail of Song
And all about you will be beauty
There is a path out of every dark mist
Over a Rainbow Trail
Navajo song.
The songs sung during the broadcast were:
“I am the Land”
“Caim agus Curragh”
JJ Middleway – Druid.
From a live broadcast:
‘Tea with a Druid’ number 57 — Order of Bards, Ovates and Druids

If you opted-in to my mailing list, you may receive occasional emails on important updates or service information. You have the right to opt-out or and have any personal details removed at any time, please email karen@kcgraphics.co.uk