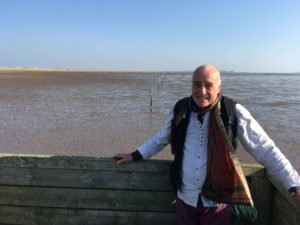 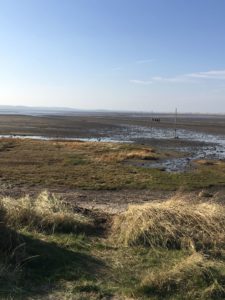 In this way we lightly yet powerfully carried our communal spirit across the waymarked route towards the sacred isle in the far distance.  It looked to be a fair old way away.  I gather it is of the order of three miles in distance. Yet it is anything but a straightforward walk as we were soon to find out.  Just to compound the challenge, a couple of us decided to go barefoot, a decision I seriously questioned after a couple of minutes as the purposely rough tarmac of the causeway bit into the soles of my feet.   Fortunately, after a couple of hundred yards we veered right and out across the extensive expanse of the tidal plain, with guiding poles around twenty feet high stretching out in a seemingly unending line before us.
It was the most gloriously and vibrant sunshiny day, worthy of memory even without allowing for the remarkable and special time we were in the midst of sharing together.
The pilgrims route was slightly daunting as it was inspiring.  Mud oozed between the toes for a stretch. Then followed a period of negotiating  rippled sand which was dazzling and almost hallucinogenic in its mezmerising ability to hypnotise.  This was only one of the tricks that the pilgrim route had in store for us.
Every now and then we came across the slightly unnerving – yet meant to be reassuring – sight of ‘platforms in the sky’ – places of refuge
for those unlucky enough to get caught out by the tide.  It made one wonder how many people had availed themselves of this unique and basic form of hospitality. And how many before their existence had perished for want of such thoughtfulness. It was easy to imagine the tide rushing in and a dirth of options for survival.  A weathered and rusty plaque on the side of one such structure informed us that it was Nat West Bank to whom we were indebted on this occasion. 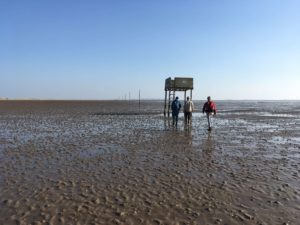 Then came a period of negotiating small creeks and stinking sticky mud which on occasion glooped up, nearly to my knees,  sucking me disturbingly down further into adhesive gunge .  There followed a spell of negotiating sands riddled with thousands of small sharp shells. All the while the half mirage of the dunes in the distance, with the occasional ant like vehicle catching the sunlight.
Gradually and imperceptibly, we gained ground and the island became nearer than the mainland. Meanwhile we chatted and shared stories, inspired by location, vacation and vocation. It felt unusually rich. Later once we’d had a chance to reflect, we all acknowledged the ‘specialness’ of it all, that unusual coming together of time and space, people and place in magical constellation. How blessed were we this day.
Eventually we reached the island – a real sense of gratitude to reach terra firma.
A couple of hours wandering the ruins of the Priory, then sharing a cuppa and cakes as the sun began to wane, before heading back again. The long trek back, with a somewhat chilly headwind as we headed roughly west,  the sun slightly to our left.
Each guide post a reminder of the invisible guide posts of life and how readily they can be lost – especially in a fog or mist. Then, it is easily possible to symbolically drown in life too, as I have done on occasion, simply through lack of awareness.   So I was deeply grateful to the posts now and fully aware of their value and significance.  I saw one or two of our group wander off track a few times, then have to back track or correct their course as they realised that the posts were in that alignment for good reason. The sea, as with life, deserves great respect and honouring lest it take us unawares.
It was fitting that we made it back to the mainland literally just as the sun gently lowered itself from view over the horizon. I felt replete; nurtured and nourished at so many levels.
That evening we again made fire on the beach – just us in group solitude, now with Ian and Merlyn joining us, while Adam and Bill had had to depart.    The magic of the stars, the sea, the sand, the spaciousness.  Around the fire we shared song and soulfulness in gratitude and graciousness, before heading to bed. Simplicity and depth. Music and mirth. Reverence and harmony. I slept well – just not for very long. Dawn was already approaching.
JJ Middleway – 28th Feb 2019