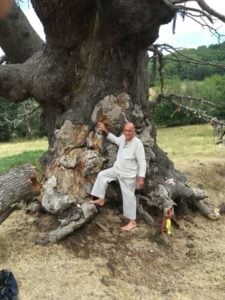 An old man‘s thoughts are full of chatter, trivia and distraction
The object of the thoughts tend more toward consideration of the self
An elder‘s thoughts are spacious, still and present
The object of the thoughts tends more toward Self
The greater good beyond the self.
An old man‘s actions are filled with pain and suffering
Bemoaning an aged body and things ‘gone wrong’
His resentment is having to do anything to help anyone but himself
The result is he resents himself
An elder man‘s actions are filled with a sense of joy
and fulfilment; of sharing his gifts without condition
His holy sacrifice is to give of himself from a loving heart.
As he blesses the world around him, he is blessed too
An old man‘s feelings are more generally unconscious
He diverts by default to whatever addiction best satisfies
His penchant for distraction
Rather than acknowledge and owning who he truly is
Warts and all.
An elder man has shed the need or the illusion
To constantly satisfy the ego self
But being human still recognises and acknowledges
His tendency to do so on more occasions than he might wish
However, being an elder man, he has an easy capacity to forgive himself
Just as he forgives others.
An old man finds this much more difficult, almost impossible
To do.  Shutting off to his inner truth and in trying to deny the pain
He inadvertently makes his life and all around him , a misery.
Dwelling in inadequacy and resentment he is more likely to blame
anyone but himself rather than take responsibility for being who he is.
An elder man fully owns his pain – the inevitable consequence of a life
And transmutes it into an unquantifiable wisdom presence
Which is nonetheless fully tangible and available.
Transformed into a gift
An elder man, having been stripped back to his core
understands humilty as being at the heart of his humanity
And thereby enables a contagious humour and infectious smile to
Break out wherever he wanders.
An old man meanwhile, regards humilty as being a weakness
diminishing his stature and questioning his manhood
An arrogance and false smile in public
Belie an inferiority and sadness in private
His energy leaves a shadow in his wake
An elder man inspires and enthuses simply
through his presence
His supreme vulnerability is his supreme strength
A consequence of letting go rather than grasping towards.
An elder man is a radiator while an old man is a drain
An elder man recognises and understands his fallibility
He can smile at the perverse and the tragic
As well as the trivial and the comic
An old man is more likely to be of the grumpy variety
We’ve all seen what that means
Grump grump grump grump grump grump grump
An elder man inspires through simplicity of being
An old man fears death
Dreading his inevitable departure
Denying his mortality
And thereby paradoxically
Denying his life
An elder man embraces death
Living each day
As if it were his last
Spilling forth his bounteous legacy
Of love
Into eternity